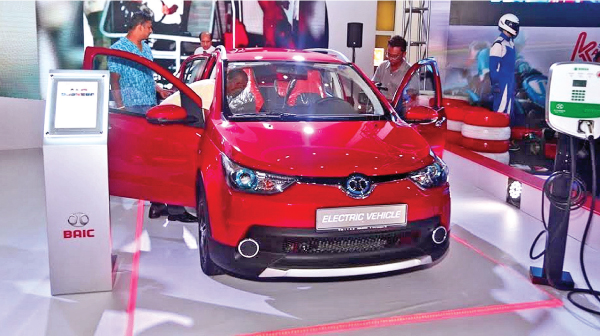 According to the data released by EV Sales, thanks to the outstanding performance of the US, Europe and especially the Chinese market, the global electric vehicle market hit a record high in December, delivering more than 170,000 units, an increase of 67% year-on-year; throughout the year 2017 Sales exceeded 1,223,000 units, an increase of 58% compared to 2016, which in turn contributed to global electric vehicle sales accounting for more than 1% of global vehicle sales. 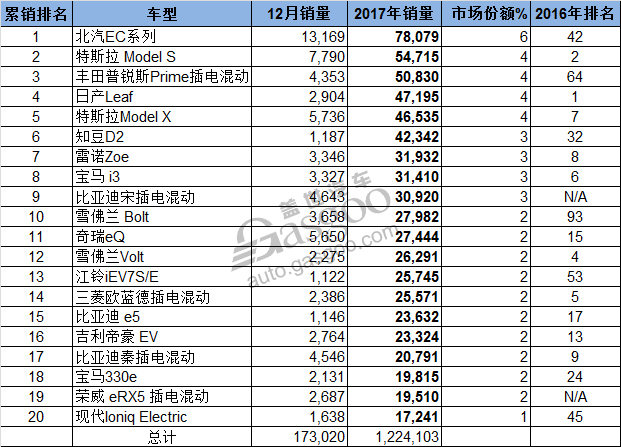 From the perspective of the sales volume of the models, Beiqi EC series is particularly eye-catching. It broke records in the monthly sales in the second half of 2017, and also brought strong impact to Tesla Model S. The historical sales of the EC series have been achieved historically. 78,079 vehicles. The Tesla Model S ranked second, with a total of 54,715 sold last year.

The winner of the bronze medal was also surprised that the Toyota Prius Prime plug-in mixed version had an annual sales volume of 50,830 units with a sales performance of 4,353 in December. This is also the second time that he has won the bronze medal, the last time in 2013, when the sales volume was only 23,000.

Last year's big winner, the Nissan Leaf, ranked fourth only this year, and the new generation of Leaf is about to come out and it has grown in length. In addition, there are two models that may be more unexpected for 2017. Among them, Tesla Model X's delivery volume almost doubled to reach the fifth place; Chidou D2 has been ranked in the top ten for the past year. Efforts were made to deliver the final answer with a total of 42,342 cumulative sales.

The other two models also rushed into the top ten rankings with the â€œdark horseâ€ attitude, that is, BYD Song plugged in the mixed version, ranked ninth, sold a total of 30,920 vehicles; Chevrolet Bolt production has improved, with the help of 2018 models eventually Ranked 10th.

However, from the 11th to the 20th of the year, 6 of the models are from Chinese brands, and there are also three models with a large decline from the rankings in 2016, which is the Chevrolet Volt fell from the fourth position. In the 12th place, Mitsubishi Outlander's plug-in hybrid performance worsened from the 5th to the 14th; BYD Qin dropped from the 9th to the 17th, mainly due to replacements. reason. 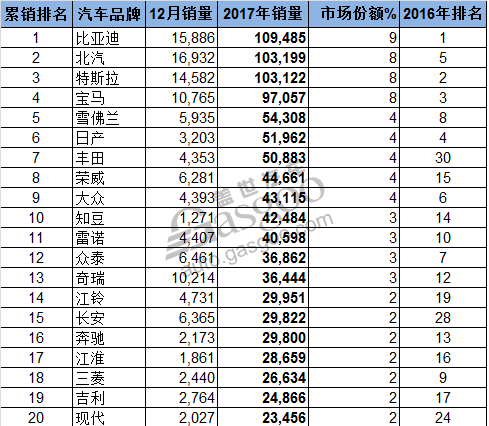 Judging from the sales ranking of electric vehicles in December, there are five brands with double-digit increases, which was almost unimaginable a year ago. However, from a whole year's perspective, BYD has no doubt ranked first, which is that it won this honor for three consecutive years, with total sales of 109,485 vehicles. In addition, the sales of the two major brands exceeded the 100,000 mark, which is Beiqi and Tesla respectively. At the same time, Beiqi also ranked second ahead of Tesla with a slight advantage.

The rapid growth of BAIC is undoubtedly surprising. It ranked only 12th in 2015 and quickly rose to the 5th place in 2016. This year it also won a silver medal. I wonder if it will win the championship in 2018?

With a strong product line, the BMW brand sold 97,057 vehicles last year, ranking fourth. Starting from the fifth place, sales have already opened up with the top four. Among them, Chevrolet performed well and its annual sales exceeded 54,000, ranking fifth. Nissan is only ranked 6th, its Leaf model is older, and Toyota has risen to 7th with the Prius Prime plug-in mixed version, the best result since 2014.

Judging from the ranking of 11-20, there are altogether six Chinese brands in the finalists, which also makes Chinese brands occupy half of the top 20 rankings. Among them, Changâ€™an performed impressively, ranking from 28 to 15th. In addition, Hyundai Motor ranked first in the top 20, and sold 23,456 units last year. Mitsubishi has set the worst performance since 2013. Last year, sales volume dropped by 17%, and it sold nearly 27,000 vehicles, ranking 18th.

The sales championship of each level

â—Sports car/convertible: The BMW i8 has no real competitors in the category, with 3,908 cars delivered last year; the second is the Cadillac ELR, which sold only 617 cars last year; Citroen e-Mehari sold 544 cars, Ranked third.

Although Mitsubishiâ€™s sales have increased, it is still unable to withstand the decline in overall sales of the alliance, mainly due to the older Nissan Leaf model, but the new models will be on the market. It is expected that the sales volume of the Union in 2018 will continue to grow and is expected to increase from 200,000 to 25 Between ten thousand.

Despite the poor performance at the beginning of the year, BYD worked hard to overcome various difficulties and even conquered production restrictions, and the sales volume increased by 14% compared to 2016. It is expected that it will continue to grow in 2018, but with the accelerating electric vehicle offensive of the car companies behind, BYD is in dire straits.

Thanks to the EC series, BAIC Group's performance in 2017 was a pleasant surprise. In addition, Changhe Automotive was also included in sales. It ranked third in the plug-in hybrid vehicle market, but if it was only based on sales of pure electric vehicles, BAIC ranked first in the Tesla and Renault Nissan alliance. Although it is difficult to replicate the growth rate of 126% in 2017 in 2018, the sales target of 170,000 is very easy for it.

Geely's brands are comparable to the Volkswagen Group. With the significant growth of Zhidou, Geely and Volvo, sales in 2017 exceeded 103,000 units. With the addition of the lead collar brand, Geely will maintain growth throughout the year 2018.

Although Tesla put forward many "dreams", he still failed to dominate the global electric vehicle market in 2017, which rose by 36%, which was lower than the 58% increase in the global electric vehicle market. Therefore, in general, its market share is declining, and with the introduction of the Model 3 in 2018, the situation may be greatly improved. It is expected that the annual sales volume will reach 250,000 units.

BMW had previously stated that its 2017 sales target is to exceed 100,000 vehicles, and now it does. The BMW i3 has been released for four years. Its sales in the global market last year reached 31,482 units, an increase of 23.3% year-on-year. The popularity of the plug-in hybrid version of BMW iPerformance continued to grow, doubling total sales to 63,605 vehicles. The MINI Countryman plug-in hybrid version released in June 2017 also contributed to the growth of the Group's electric vehicle sales, with a total of 5,799 vehicles delivered. The BMW Group expects its electric vehicle sales in 2018 to maintain double-digit growth. The target is that by the end of 2019, the Groupâ€™s electric vehicle fleet will have at least 500,000 vehicles.

The Volkswagen Group's electric vehicle sales exceeded 70,000 units. Currently, it is mainly plagued by the shortage of electric vehicle models. It is not expecting a substantial increase in 2018, and will focus mainly on 2019.

SAIC Group's sales in 2018 will even exceed 150,000, not only benefiting from the potential of the Wuling E100, but also Roewe's potential, and the MG's product line will also increase plug-in hybrids.

GM is mainly focused on the North American market, so it also overlooked two major growth engines. GM currently has only two electric models in China: the Buick Velite/Volt and the Cadillac CT6. Both models are sold poorly in the Chinese market. In addition, the Chevrolet Bolt is currently showing a slow growth in the United States. Another growth engine is the European market, and General Motors sold its European business Opel to PSA, which also lost Opel Ampera-e this strong growth.

Toyota only entered the top ten rankings with a plug-in hybrid model, and its sales also surpassed those of Hyundai-Kia and Daimler-Benz. Sales of the latter two groups were around 41,000 and 37,000 respectively. Toyota has been immersed in the fuel cell vehicle market for a long time, and now it is looking at the plug-in hybrid car market. It is already ranked tenth in terms of one model. It can be seen that with the increase of models, the potential of Toyota is infinite!